After leaving the car-park, a track was taken directly uphill. Forests always seem to be a bit of challenge for me at the start of a walk and so it was this time trying to follow directions from Cameron McNeish’s book. After a frustrating time not finding the spot I wanted to get to I eventually located the path that lead out of the forest and on towards the belach above. When finally the col was reached a right turn was made and the good path followed to the top of  Sgorr Dhonuill. The mist started to part on the way back down with really interesting clouds forming over the peaks of Glencoe and Glen Etive. The path to the top of  Sgor Dearg was clear and the peak was soon reached. The descent was made down the north ridge of Sgor Dearg. This was a very  pleasant way down until the point where I had to force my way through the forest to gain access to the track back to the car.

A walk to repeat in order for me to savour the view s into Glencoe, Glen Etive  and across to Mull.

I was really  looking forward to the ascent of the Buichaille. I had climbed one of the ridges to the summit during a school Fell Walking Club trip to Glen Coe in 1976 but I was pretty certain I had not climbed Stob na Broige at this time. The ascent of the Buichaille was combined with climbing the two Munros facing the Buichaille, Stob Coire Raineach and Stob Dudh. Again I was accompanied on the walk by Richard and we made good time together over the hills.

Having met Richard in the Youth Hostal in Crianlairich, we decided to team up to complete the Munros on the southern side of Glen Coe. This we did over two days, the first being the ascent of Bidean nam Bian and Stob Coire Sgreamhach. We did not find the path at the outset in the Glen but went our own way up the western end of An t Sron on a grassy but well paced ascent to the higher peaks. Stob Coire nam Beith was reached in good time ready for a mid-morning snack. The walk around the corrie head was entertaining but in no way particularly exposed but our original plan to descent to the Lost Valley proved to dangerous to consider due to the snow and ice still present at the top of the gulley where the descent was due to start. After bagging the summit of Stob Coire Sgreamhach we then retraced our footsteps over the Bidean and then completed the descent on the path we should have taken on the ascent. 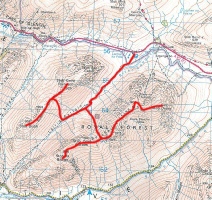 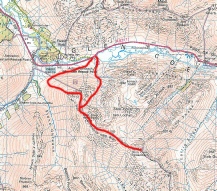 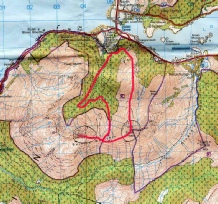