After the drive up from York and the check in at the Ratagan Youth Hostel, I drove around the peninsula to Arnisdale village and the start of the ascent. The way was marked with a very clear sign and the path lead more or less directly via a subsidiary peak and a connecting ridge to the top of the mountain . The views across into Knoydard should have been memorable but the area was shrouded in mist and not visible. A quick ascent was made with the help of my Ino8 shoes but my feet were very wet at all stages of the ascent and descent.

After the climb of the other two peaks in the area during the the morning, Sgurr a Mhaoraich was completed in the afternoon.  A very straightforward ascent that was completed in good time with great views again both north and south.

I was particularly looking forward to getting to the summit of these hulls on the north side of Loch Quoich so as to see the Glen Shiel ridges I had traversed in the Summer of 2009. The area is served by excellent stalkers paths and these were taken advantage of for a speedy and easy ascent. The route was interesting with good views back across Loch Quoich into the Rough Bounds of Knoydart, the hills climbed a month earlier. The weather was a lot kinder than on that occasion with some sun and good visibility. 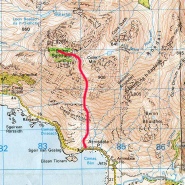 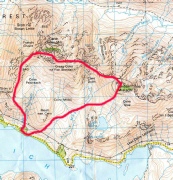 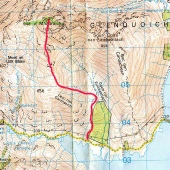 The ascent of the three munros in Knoydart has been high on the Munro target list for a long long time but I had not had the weather window I wanted when I was in the region. I had hoped to complete them during my walk through the Rough Bounds of Knoydart but the bashing I got from the weather in the Rough Bounds put paid to that. So after finishing the Munros in Glen Coe I set off very early from the Crianlairich Youth Hostel to drive up to  with the hope of some reasonable weather to set forth into magical Knoydart for the first time.

The walk in to Barrisdale was quite muddy and there is a significant amount of ascent on the coastal route. Finally the bothy was reached at Barrisdale . A chat with the warden of the bothy confirmed the remoteness of the site with a description of having to take to boat over to Mallaig or Kyle of Lochalsh to do the shopping. The ascent of first Munro, Luinne Bheinn, was mostly on the track that links Barrisdale and Inverie but the last part of the ascent was taken with the aid of the compass due to the mist. The weather however improved after the summit and the path to the second Munro, Meall Buide,  became clear. This was reached in the late afternoon. The descent to the bealach Mam Barrisdale was a long affair and it was with some relief when the ascent of Ladhar Bheinn was started on the far side of the belach. The face of Stob a Chearcail looked quite intimidating and it was only when up close that the path though the face became obvious. The continuation of the ridge to the summit of Ladhar Bheinn involved some mild scrambling and a considerable amount of up and down and the summit was finally reached at about nine in the evening. A site of the bivi was then needed to bed down for the night and this was achieved at the 960m spot height on a very flat and pleasant stretch of grass. A good night’s sleep then followed. The walk out back to Kinloch Hourn the next day was very pleasant and I was back at the car for the return to York by about eleven in the morning.

A wonderful and very memorable foray into a fantastic area for exploring. 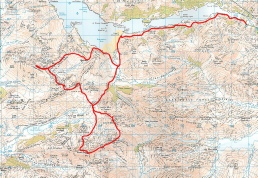