Sgurr nan Coireachan and Sgurr Thuilm lie just outside the Rough Bounds of Knoydart, peaks that I had completed a few weeks before. The views from the summit of both Munros are potentially great westwards towards Rhum and Skye.

A private road was taken up Glen Finnan and under the impressive Victorian concrete viaduct. The Corryhully bothy was passed and the track followed for another 1km to its highest point, passing a waterfall on the way. A small cairn and signpost showed the path to Sgurr nan Coireachan. Sgurr a'Choire Riabhaich summit was sidetracked slightly until at a minor top, a line of fence posts was picked up and followed to Sgurr nan Coireachan's summit.

From Sgurr nan Coireachan's summit a worn path and fence-posts were followed over Meall an Tarmachain, Beinn Garbh and Bealach Leathann until finally Sgurr Thuilm's summit cairn. The view was spoiled by mist unfortunately.

The descent was over mainly grassy ground down Druim Coire a'Bheithe to the right of way in Glen Finnan, the Corryhully bothy and finally back to Glen Finnan. A fine circuit.

Gulvain is a long mountain standing above Loch Eil to the south and Loch Arkaig to the north. Access from the south was made by an easy  track up Glen Fionnlighe.

After parking the car carefully so as not a annoy any of nearby houses, the track was located complete with signpost, This initially climbs then flattens and drops to a bridge over the Fionn Lighe. The  Allt a'Choire Reidh was finally crossed using the wooden bridge and the path started to zig-zag as it climbed up Gulvain's southern shoulder to the minor bump at 855m. A well worn path eventually lead to a ridge before the last pull up to Gulvain's summit with its large cairn.

Sron a'Choire Ghairbh and Meall na Teanga can be seen as you drive along the A82 north of Spean Bridge, They stand above Loch Lochy and are accessed by Kilfinnan. The forestry tracks were used to help make rapid and easy progress to these Munros and fine stalkers paths continued to just below the summits.

As Steven Fallon suggested in his route, the car was left at the turning circle by the farm at Kilfinnan without any aggravation of any sort.  The forestry track was followed until a sign-post indicated a path up and out of the forest. This was wide and easy to follow to to the bealach separating Sron a'Choire Ghairbh and Meall na Teanga.  A fine stalker's path zig-zagged its way up Sron a'Choire Ghairbh's southern side and finally the edge of the coire lead up to the summit cairn.

After returning back down to the stalker's path at the bealach between the peaks, the climb up the slopes of Meall na Teanga was started. Thick mist on the peaks did not cause any signifiance navigational problems but it was difficult to gain any idea of the lie of the land from the top. 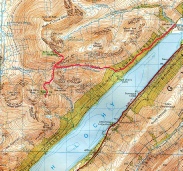