The aim of my first Munro bagging trip to  Scotland in 2011 was the area of the Glen Cannich that encircles Loch Mullardoch. There are twelve Munros on the circuit and it was hoped to complete them all over a 2 day backpacking trip using Steven Fallon's route description as a guide. 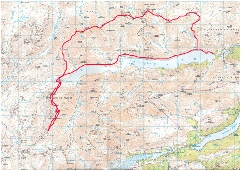 After the long drive from York, the MWIS weather was checked - not great but it is May I thought. So early the next morning I drove through the beautifully wooded lower reaches of Glen Cannich, narrowly missing one of the many deer running across the road. After reaching the Dam, I set off following the Steve Fallon route, hoping to complete the four northern Munros first then crossing the Glen to complete the other eight on the the Southern side of the Loch.

The stalkers path was followed from the Dam up the East bank of the Alt Mullardoch and into Corire an t-Sith. The weather was holding and it was good to be back on the Scottish Hills after a year away from them. The steep grassy slopes of Creag Dhubh lead to the ridge and the final ascent of the first Munro of the day, Carn nan Gobhar. The wind had now increased and the day was marked by very severe wintery showers with limited visibility followed by sunny breaks. The high winds were pretty constant throughout the day though. The great ridge was followed through the rocky pinnacles of Sgurr na Lapaich and over the broad summit of An Riabhachan from which a twist leads down to the bealach below An Socach. The final summit on the North of the Loch was completed and a grassy line of descent found to the head of the Loch at the Gobh-alltan. The next problem was to cross the river feeding into the Loch which had been swollen by a week of very heavy rain. After this was accomplished without being swept into the Loch, a track was followed uphill to the Allt Cam waterfall and the grassy slopes that lead eventually to the bouldery summit of Mullach na Dheiragain. A good path was followed towards Sgurr nan Ceathreamhnan in very strong winds. The bealach below the summit was chosen as a suitable bivi spot since there were some big rocks to give some protection from the wind. The bivi bag was unrolled and I retreated into it away from the wind and the winter showers. I slept surprisingly well but woke on occassions to find the weather getting even worse with a considerably layer of snow now lying around my bivibag. When there was enough light I assessed the situation again, decided enough was enough and planned my retreat. The ridge back to the Mullach na Dheiragain summit was taken followed by the descent to the Head of the Loch. Another scary river crossing saw me onto the the indistinct path beside Loch Mullardoch and the long tramp back to the car. 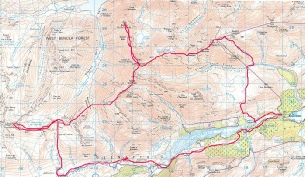 Back to the Glen Affric and Mullardoch area in June after the aborted attempt at the whole Mullardoch circuit in May. This time the mountains were approached from the south via a night in the wonderful, remote youth hostal at Alltbeithe in Glen Affric. After the drive from the south, the car was left in the Glen Affric car park. The three hour walk in through Glen Affric was wonderful and gave time to admire the wonderful Caledonian pines in the lower reaches of the Glen. I was joined at the hostal by a group of German walkers who very kindly shared their meal of pasta and pesto with me.

The day started with reasonable weather and visibility. The path to the col between Sgurr nan Ceathreamhnan and An Socach was picked up at the hostal and followed all the way to the belach. Turning left at the belach, the ascent of Sgurr nan Ceathreamhnan was uneventful but the visibility had closed in before I reached  the summit so it was not possible to see the view from what is considered one of the great hills of the Western Highlands. The ascent route from the belach was then reversed and the series of ascents of the other peaks started. I was feeling that luck was certainly not on my side with the Scottish weather since the mist thickened even further and maintained its hold on the mountains for the rest of the day complemented with heavy showers of rain. Navigation on the wide hogs back ridges of Mam Sodhail and its neighbours kept me on my toes all the day making sure no mistakes were made on the traverse. The crux of this was probably the "there and back" section north of Carn Eige along the sinous limb to Beinn Fhionnlaidh which proudly sits above Loch Mullardoch. The weather at this point was particularly horrible. Progress was slower than anticipated with the level of navigation required so when Tom a'Choinnich's summit was reached it was time to make tracks back to Glen Affric  rather than carry on to the last Munro on the circuit, Toll Creagach. So the magnificent views from the summits of Kintail and beyond will have to wait to my second round of Munros.

After an aborted attempt to drive up Strathfarrar due to the entrance gate being closed on Wednesday mornings, the revised plan of the day was to finish off the last Munro of the Mullardoch circuit, Toll Creagach. The Dam at Mullardoch was the start point of the walk and Steven Fallon's descent route reversed to the top of the summit. Weather again was pretty bad but I did not feel it was a wasted day having now completed the twelve Munros on the Mullardoch circuit.