A completely new set of hills for me. There is a splendid wilderness atmosphere about them,  offering a genuine feeling of remoteness even though the main Ullapool road is never far away. The Fannaichs form a long chain of peaks in the high ground between Loch Fannaich, Loch Glascarnich and Loch a'Bhraoin. The nine munros in this chain were climbed in one long day. Fionn Bheinn was climbed from Achnasheen in the south as a separate walk. 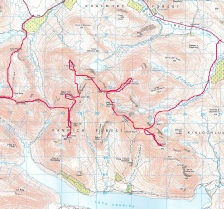 The Forest Way bunkhouse was left early in the morning so as to ensure a good early start on the walk. The car was left at the western end of Loch Glascarnoch and route to take in the 9 munros peaks started in an east to west direction. Following Steven Fallons route, the signs directing you towards Beinn Liath Mhor Fannaich were followed. Heathery easy ground lead to the first Munro of the day,  An Coileachan. The connections between the peaks were then followed as each Munro was summited in tern. The views improved as day progressed, with An Teallach and the Destitution Road getting ever closer.

Progress was good but the 400m climb up Sgurr Bhreac was tough towards the back end of the day. The summit was finally reached and whilst on route towards the last peak, A'Chailleach, Iain from the bunk house was rung from the mobile so as to take up on his very kind offer of a lift back to my car at the end of the day.

The descent was marked by the very steep climb down Druim Reid - not what you want after nine Munros!  Twisty and slippery,  the path is obvious and heads down to a bridge at the eastern end of Loch a'Bhraoin and eventually the lay-by on the A832, the 'Destitution Road'. Transport arrangements worked out fine and I was back at my car in no time at all. Thanks Iain - much appreciated.

The onslaught of an absolutely foul day provided the encouragement to do the singlet peak in the Fannaichs range. Not a lot to report from the day but the fact that it rained a lot and there was nothing to see. The peak would I am sure be pretty uninspiring  even in good weather.